I have had two site updates recently. My chawan page on Yakimoto has had a recent tea bowl added:
http://www.facebok.com/pg/Yakimono.ww/photos/?tab=album&album_id=651731088170372
and my page on Artaxis has been updated with current images:
http://artaxis.org/lucien-koonce/
Posted by Lucien Koonce at 12:52 PM No comments:

It's always nice to get a bit of "exposure" in Ceramics Monthly magazine. This is from the October 2017 issue, page 14. My tea bowl (#1) was in the Workhouse Clay International. 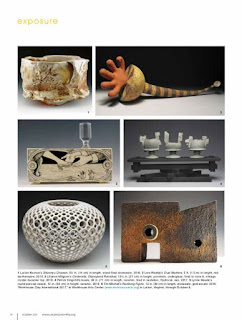 Posted by Lucien Koonce at 10:59 AM No comments:

On Friday, October 6th, Artful Ambience: Contemporary Sake Vessels with Character opens at Schaller Gallery, in St. Joseph, Michigan. This is an exhibition I curated and will include thirty four artists from eight countries. Here is a list of the participants:

These are the eight wood fired kurinuki sake vessels I will have in this exhibition, each with its own signed wooden box:


This is the curatorial statement I wrote for the exhibition:

Sake, an alcoholic beverage made from fermented rice, has been one of Japan’s most ceremonious beverages since the 1300’s. Today, sake consumption is enjoying a global expansion, with breweries opening throughout North and South America, China, Southeast Asia, and Australia. Clay as a material for making utilitarian objects has been in existence since around 14,000 BC, beginning in East Asia, which includes China and Japan. The Japanese culture surrounding sake consumption developed vessels specifically for the pouring and drinking of this beverage.

The terms guinomi (cups) and tokkuri (flasks) are most synonymous with shuki (sake ware) and the drinking of sake. The viewer, when looking at all the various styles of work, may ask, “What’s the criteria for a good sake vessel”? First and foremost, the bulk of an answer centers on how drawn one is to the aesthetics of a particular piece. Of course, one can’t escape competency by the maker regarding the weight, its balance when held and, in a cup, how it feels against the lips. None-the-less, the character of a vessel makes the overall experience unique and special, providing an artful ambience to any setting. Robert Yellin, considered to be one of the most noteworthy authorities on Japanese ceramic sake vessels, states: “Some things in life have a natural charm, the ability to draw you in and absorb your attention to the exclusion of all else, if even for only a few moments. The combination of good sake and . . . yakimono (pottery) is one such simple joy. Although there is much more to yakimono than only tokkuri (flasks) and guinomi (cups), the overlap of  this special niche of the pottery world with the world of sake buzzes with a magic all its own.”

This exhibition seeks to expose the viewer to a smattering of the ceramic sake vessels being made by contemporary artists throughout the world. While demonstrating the aesthetic diversity among sake ware being made today, the intent is showcasing the unity brought forth by a single passion: the love of making shuki. Kanpai!

Posted by Lucien Koonce at 6:53 PM No comments:

I have been firing with Chris Gustin, in his anagama at South Dartmouth, MA, since 2009. This year represents the 20th anniversary of the kiln's construction. Also, this marks the 30th anniversary of Watershed, a program that Chris helped start. To honor these two milestones, an invitational exhibition is being held at Chris Gustin Gallery for the month of September, 2017:
20/30 : Gustin Anagama/Watershed Anniversary Exhibition
These are the pieces I have in this show...


Posted by Lucien Koonce at 8:35 PM No comments: