I recently converted an old electric kiln over to one that fires with gas and wood. I fired a load of sake cups last Tuesday for the initial firing. I have given this little kiln the name "Chokkuragama". Chokkura is an adjective which translates to "little" in Japanese, and gama translates to "kiln". It was a fourteen hour firing, from start to finish, which included reduction cooling. Needless to say, it will take a few firings to figure the kiln out and have more successful pieces than I did this maiden firing. Here are a couple of images of the kiln, and the five guinomi that meet my aesthetics. 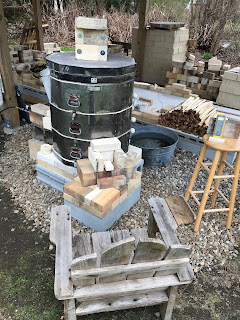 An overall view of the kiln, with gas burner at back left, and wood stoke port in front. 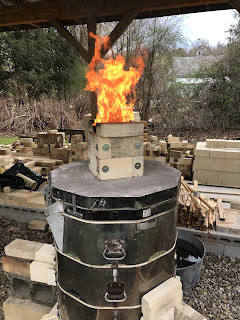 Flames exiting the chimney after stoking a couple pieces of pine. 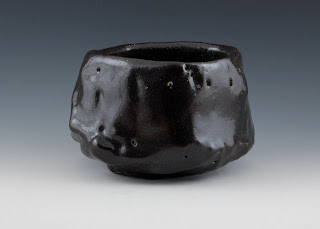 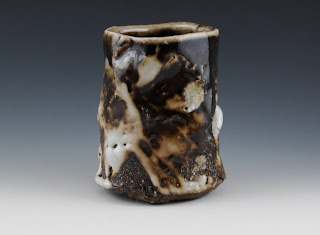 Hikidashi * piece; previously had been fired in the anagama, but was under-fired. 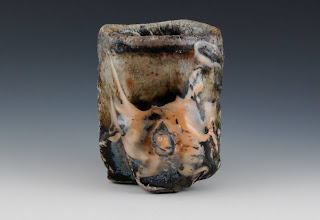 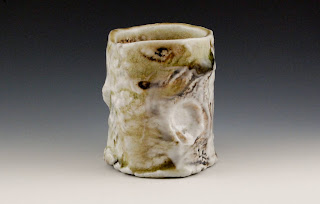 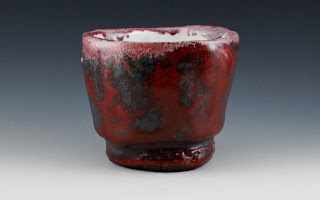 This piece was fired in a saggar to protect it from the reduction atmosphere. It is an oribe glaze but came out looking like the Chinese Blue of Jugtown Pottery and Ben Owen Pottery from the second quarter of the 1900's (imo).
* "Hikidashi" refers to the technique of removing a ceramic piece from the kiln at peak temperature (2300 F). These two sake cups were immediately plunged into water upon their extraction, which caused the iron-rich clay slip to go black in color.