Thrown Off the Hump

I have used the kurinuki technique for making my work since 2009. It is a slow process, but one that I love. In an effort to branch out on making guinomi (sake cups), I am starting to throw them off of the hump. I have been a hand-builder most of my ceramics career. I threw on the wheel for the years I as at ECU, but once at U of IA, I started hand-building and have continued to do so. Thus, throwing again is an adventure! Yet, I can still work the surface and foot by hand after it has been removed from the wheel. 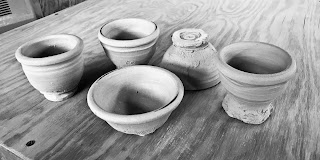 A few guinomi hump thrown and hand trimmed. I like the fat rim. 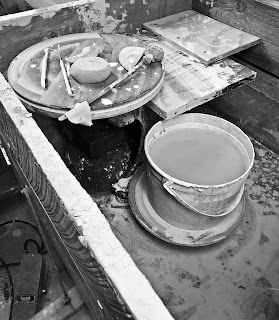 My rudimentary set-up...an old Amaco (two speeds) with an added foot pedal, sitting on, and in, an old treadle wheel.